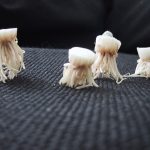 My random thought today, as I scan the web for SF-related news is that the current novel scene seems rather locked into a specific set of genre tropes. This is not to say that unusual work isn’t out there, but it seems buried under the snowdrifts of medieval fantasy, vampire stories, media tie-ins, and politically unlikely dystopian futures.

Why do we do this to ourselves? Do we imagine for a moment that the space of all story-types has been mined out? Is it hard to conceive of new or interesting settings for great tales? Do we honestly believe that readers have lost their appetite for freshness or imagination? I certainly don’t. And to make the point, here are five new genres that I’d love to see happen.

This is what you get if you cross a wild west bodice-ripper with The Martian, and throw in a little Ghost In The Shell for good measure. Can’t you picture it?

“We can never be together Brad, we’re simply incompatible!”

“Why should we let that stop us? I have a fiber-optic cable and a pipe wrench right here. And at least six hours of air. Open your socket port, my love, and at least let me try!“

I think it would be awesome. I might even pick up a romance book if they were like this—full of lust and technical problem solving and sharing air mouth to mouth. The number of hardware/software wordplay opportunities alone would make these books worth looking at. Not to mention the riveting depictions of a rugged, reckless frontier life that might actually happen.

As in the current fad for dystopias, but where the trouble comes not from President Asshole and his/her visor-wearing bullies, in another cookie-cutter bombed-out America, but something altogether more optimistic and awesome. Like this perhaps:

Against all odds, Jenna Reese is plucked from her family and forced to learn new skills to survive. Her society has identified her as an Excelsior, a person with the necessary genetic makeup to allow her to participate in a risky interstellar mission. The functional and democratic society she belongs to is under threat from the cynical Red Next, a competitor society who believe that good government is impossible and shouldn’t even be tried. Only Jenna’s mission to build a wormhole can save her people. Jenna must learn to collaborate with her new crew-mates against impossible odds to take the world back from the brink before bleak-minded idiocy conquers all.

The feudal societies frequently depicted in fantasy books are full of cunning kings, sly assassins, clever wizards, and courageous heroes. This, despite the fact that the period of history the genre draws from is one that was seemingly dominated by closed-minded thinking, ignorance, and grandiose ill-conceived international wars. Not to mention poverty and disease, etc.

Maybe this has been done already, and I’m unaware, but where are the fantasy books where the wars are pointless, the heroes are idiots, palace coups screw up constantly, and the next magical plague is just one bad spell away? Sort of like a magical version of the Flashman books. I’d read them.

Star Wars is basically just feudal fantasy in an SF setting. That’s been super-popular, so why hasn’t anyone tried blending in the opposite direction? How about optimistic tales of exploration set in a magical past? Sort of like Voyage of the Dawn Treader, but for grown-ups, with gritty awesomeness. Or Jason and the Argonauts for a modern audience?

Bonus points to any author who can make the magic system something that’s amenable to experiment, so that the characters can have their own Enlightenment, but with different tech. Plus actual accounts of the experiments! And the falsification of hypotheses! And progress! Basically, Tad Williams meets Greg Egan, which would kick ass.

You know what the twenty-second century is going to be like if we don’t get our act together? My guess is wet. Lawless and wet. And to me, that says pirates. Now, okay, Waterworld was sort of in this genre, but I don’t think it barely scratched the surface of how much fun there is to be had in a damp, tropical future.

I think theres several excellent book series hiding in here. There’s ruined cities jutting out of the sea full of hidden treasure. There’s crumbling skyscrapers to have sword-fights in. There’s room for mutant monsters and radioactive curses.  There’s room in this genre for everything from the gritty to the hilarious. Just imagine a scene with a treasure-chest full of hard-drives, a fist fight, a sliding deck, and an ancient, malfunctioning taser. The possibilities are endless.

So there you have it. Just imagine how different bookshop shelves would look with a dozen titles available in each of these different story space. I think it’d be great. Things would look more diverse at the very least. Readers: I invite your comments and opinions. Authors: collaborations, anyone?