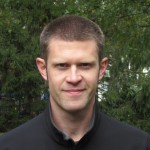 In his day jobs, Alex has worked on a myriad of unrelated software projects, including mobile applications for biologists and publishers, risk analysis software for banks, large-scale simulation of battlefields for the US Army, hyper-optimized software interfaces for major US corporations, and novel machine-learning applications for Silicon Valley start-ups.

He has also held the position of Research Scholar in the Ecology and Evolutionary Biology Dept. at Princeton University, where he worked on computer simulations of complex systems. His research has spanned the simulation of gossip, the formation of human cultural norms, the rise of wealth inequality in society, new algorithms for general machine intelligence, and the modeling of the Planck-length structure of spacetime. He has several blogs, one focussed on behavior science and improv, the other on algorithmic approaches to physics.

As an improviser, Alex has founded three theater companies and is the inventor of the archetypal improv style, a technique used to bring Joseph Campbell’s theories of narrative structure to unscripted theater. As Britain’s foremost expert on spontaneous plotting, he has created play formats now used and enjoyed across the world from London to San Francisco.

As a trainer, he has worked with CEOs, high school students, international sales professionals, astrophysicists, doctors, world-class athletes, and graduate students. He has twice been a speaker at ASTD International—the largest business training conference in the world.

Along with his novels, he has two pieces of short fiction in print, Ithrulene, a short story in the Polyphony 5 anthology by Wheatland Press. He is a graduate of the Clarion West writers program and a Milford group attendee.

He currently lives in Santa Cruz, California with his wife, Genevieve Graves, (an award-winning astrophysicist turned data scientist), and his three-year-old son, Thorfinn.