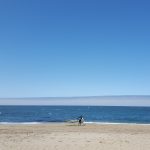 Two years ago, before I started writing full-time, I was on top of Android and iOS development. I knew both platforms solidly. I was getting my hands around Python development, and was looking at picking up Go. I was on top of trends and algorithms in machine learning, and was an agent-based simulation design ninja. Today, after having written a couple of novels and invested a ton of time in parenting, I confess I feel a little out of touch. This kind of scares me.

At the same time, I’ve noticed that there doesn’t seem to be a hot new thing in coding. A lot of the crazy buzz around JS seems to have slacked off. There are new languages, but not obviously new platforms. Everyone has a phone. Nobody cares about tablets. The internet of things turns out to be kind of limp. The one topic that seems to be all over the tech press is ‘chatbot’, not exactly a red-hot engineering opportunity, so far as I can see.

A little while ago, with my futurist hat on, I speculated to my wife that the next surge in open positions in tech after ‘data scientists’ was going to be ‘machine educators’. Could it be that we’re there already? Wired seems to think so, and at the cost of the role of the programmer. And if recent news accounts are anything to go by, providing input to train AI algorithms may not be that fun. So I’m left with the odd sense that while I’ve been away, maybe professional coding has started to slowly die off.

Now, maybe I’m just too far away from the buzz right now to know where it is. Maybe there’s a huge market for watch apps that I’m just not seeing, or everyone is writing super-cool Node-plugins for plugging into other plugins. Or something. But without that knowledge, I’m left with this curious floating feeling.

At some point soon, I’m going to have to augment my non-existent writer-income with actual money so that my wife can ease up on her startup frenzy. Is there going to be a software world to come back to? Or has the world moved ironically onward while I was busy writing about the future?